We’ve demonstrated one thing in our previous post: there are too few 1980s official releases and the 1970s are over-represented. We are not saying no more 70s shows, we just want more 1980s. As a reminder, here’s a graphic that shows the distribution of releases by decade. 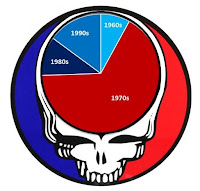 The data speaks for itself. The 1980s were nearly a third of the shows that the dead played, yet they comprise only 11% of the total releases. So, here’s a more subjective take on this: why 80s Grateful Dead deserves more attention and more officially curated and remastered releases.

The Dead’s 1980s Sound: the Year of the Tiger and the Dragon

We’d heard of them, heard a few of their radio songs, but didn’t really start paying attention until the 80s. Here’s why the Dead captured our attention for good in that decade.

Take the good with the bad: problems with the 1980s


With a more jazz-fusion/funk sound, the Dead lost a bit of their rustic charm  (which they could still whip out at an acoustic gig). They stopped doing country weepers like Sing Me Back Home, and songs like Big River and Me and My Uncle lost some of their bite. And there are certain 80s songs that we almost always skip: CC Rider, for example

But, but, Betty Boards!
Yes, anything less than a Betty Board is less than a Betty Board. Betty’s departure (or rather, ouster) from the band left the soundboard in less capable hands. Too often 80s boards have Bob buried, weak bass, and an overall sterility. Plus, this was the first use of cassettes, which meant compressed sound quality, tape flips and gaps. Clearly, someone wasn’t paying consistent attention (note the gaps filled with audience sources on the recent release of 12/5/81).

But the 1980s was the great era of audience taping. The Dead tacitly allowed, and then openly welcomed audience taping, and tapers like Jim Wise, the Oade brothers, Rango Kevashan and others did great work capturing the full throated roar and soulful whisper of the band, best heard in smaller, intimate venues like the Warfield, Henry J. Kaiser, the Starlight Theater (Kansas City), the Fox (Atlanta), and others. Dave Lemieux acknowledged as much with his bold choice of the the Jim Wise audience source for his inaugural Dave’s Picks release: 11/30/80 at the Fox in Atlanta.

The years 1987-89 have some excellent soundboards. Even when they played football stadiums, they were still the Grateful Dead.

The online community of Dead fans has addressed the sometimes inferior sound quality of 80s sources, with some impressive results. Charlie Miller is an alchemist who can take DAT-sourced audience and soundboards and make them sing for all they are worth. Hunter Seamons and Dave Usborne create magnificently deep combined matrixes using a decent audience and a decent soundboard source of the same show to make something greater than the sum of the parts: a recording that conveys both the instrumental precision of the board and the ambient energy of the audience. The point --  no one is paying these guys. We don’t know exactly how they do it. But Dave Lemieux and Jeffrey Norman can certainly equal these efforts with the resources at their disposal.

Askin' you nice, now: Some suggested 1980s shows.
These suggestions are based on several factors, mostly subjective: setlist, overall performance, a good audience or board (or both) already in circulation, and x-factor (meaning an unusual sequence, song choice, something that makes it better than average). This is by no means a complete list and we don’t have any special insight beyond the average Deadhead. This is not a manifesto, but rather a conversation starter.  In the comments section below, post your 80s choices (links to sources are appreciated). Or hit us on twitter: @80sGratefulDead 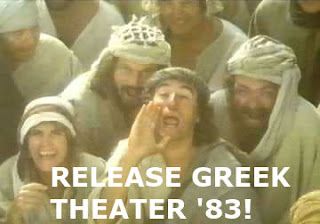 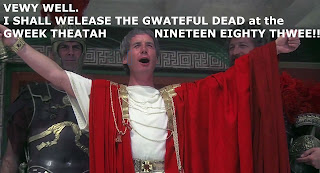