For all us that look forward to official Grateful Dead live show releases, it is always exciting to hear what the next release will be. Most of us have had access to many, if not all, of the Dead’s 2,332 shows from 1965-1995 but it is still exciting when the Dead release a little known gem or legendary monster.  These releases have come under a variety of series, Dick’s Picks, Road Trips to the current Dave’s Picks.  Dave Lemieux took over as the Dead Archivist when Dick Latvala passed in 1999.  In recent years Dave Lemieux has been curating his Dave’s Picks and releases 4 shows a year. As of January 2017, he just announced the 22nd installment. Dave’s Picks 22 is from Felt Forum 4/1971. This has become frustrating and troublesome because Dave’s and the Dead’s focus on releasing shows from the 1970s. Dave’s Picks 22 makes the 20th out of the 22 releases.  The following results don’t even include last week’s announcement of the four historic May 1977 shows. We love Betty Boards but more 70's shows? What is going on?

We are like most deadheads and love the ‘70s Dead.  The ‘70s had some peak years, runs and shows, from spring 1977, Europe ‘72, Wall of Sound shows, Harpur College 1970, the list is long. But what made the Grateful Dead interesting and great is that the band evolved over the decades and every year had amazing shows.  By only focusing on the 1970s, we miss out of the different eras, different sets & songs and especially the different keyboard players.  The paucity of Brent shows shocks us. Brent came into the band when the band was losing steam. Keith was no longer innovative and it was dragging on the rest of band. Brent's presence revitalized the Dead at a crucial juncture. Though it took some time for Brent to grow into his position and become true member of the band, the sets, song selections, and certainly the playing went through some distinctive sounding phases throughout the 1980s. The Dead were a very different band from their first incarnation in the 1960s, growth and maturity in the 1970s. By 1980, they sounded completely different from any earlier incarnation, and they were completely unlike anything else in popular music during that entire decade. More on this point later.

To look at the issue, we analyzed all the official releases from the Grateful Dead catalogue over the years. The total number of shows (2,332) by year was taken from the Dead.net database (1). Official releases have come in different series over the years. For the analysis, we broke the releases into five groups: Dick’s Picks, Dave’s Picks, Road Trips, Download Series and Vault. The Vault includes all official releases of shows that were not part of a named series.  Some examples of these releases are Winterland 1977, View from the Vault, Europe ‘72, Dozin at the Knick, and Spring 1990 Tour (2). As of January 2017, the total number of shows released is 186.

(1) There are varying opinions of the total numbers of Grateful Dead shows played. Some sources cited 2,317. Much of the discrepancies are in shows from 1965-1970, where there are missing setlists, multiple shows were played in a day, etc.
(2) Each release was reviewed and all complete or ‘semi-complete’ shows recorded. Many releases have Bonus Disks or Filler from other shows. Some of these shows were counted if a set or more was included. 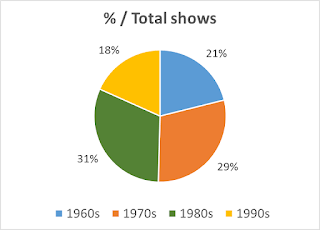 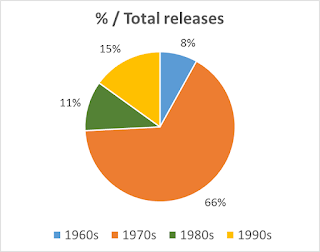 The below figure shows the distribution of the releases by year and by series type. The three big years for releases are 1972, 1977 and 1990.  This is due to large box set releases.  The graph shows a significant deficit in shows from 1981 to 1987, which is only represented by a handful of releases from Dick’s Picks. Interestingly, Dick’s Picks has a fairly distributed number of releases over the 36 volumes. As stated above Dave’s Picks has the most uneven distribution over the years compared to the other series. 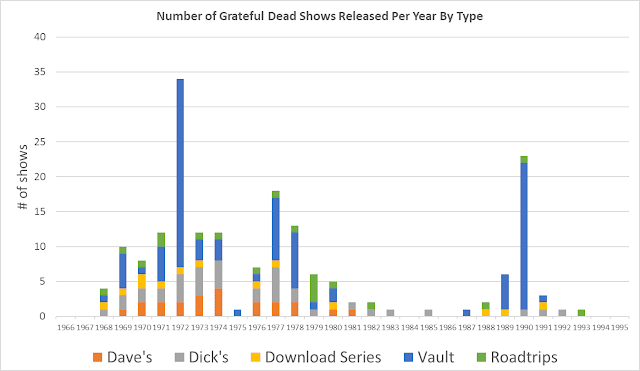 Lastly, the following graph shows the distribution of releases by year compared to the total shows in a given year. Again, the 1970s are shown to be greatly over-represented in the releases. What is shocking is that 39% of all 1972 shows have been released and 1990, 1977 and 1974 releases represent over 30% of shows in those years. These years make up 47% of all releases. The graphs also plainly shows the lack of 80s and early 90s era shows. 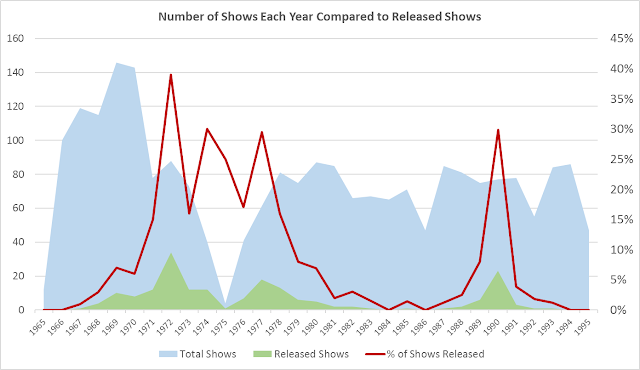 So why are we not getting other shows outside of the ‘70s? We are going to make an affirmative case the 1980s Grateful Dead in this blog as just as worthy, just as interesting as 1970s for listening and curation in a series such as Dave’s Picks. We think not only are there many great shows through out the ‘80s, but the lack of officially released ‘80s shows is a disservice to Brent. His era not only brought into the deadhead community a second generation of heads but he was part of the band when they became one the biggest touring bands in the US. By not releasing ‘80s shows is not only misguided but in our opinion just plain lazy. If Brent can’t get any love, the Bruce Hornsby-Vince Welnick era is definitely out. Dave Lemieux, this an open letter to you as well as a defense of the 1980s Grateful Dead. You have been a dedicated and wise curator of an invaluable American archive, the Grateful Dead Vault. We have trust in your judgment and stewardship. But we (and we cannot be the only ones) are hungry to hear the best of the 1980s Dead in the kind of high-definition, remastered sonic glory only official releases can provide. So Dave, if you are having trouble picking shows, we will be happy to provide a list of our suggestions for you to start with. You have a lot to make up for!