It has been a while since we updated the numbers of Grateful Dead releases.  I guess we have been listing to too many 80s Dead shows, getting ready for the summer Dead and Co. tour and recovering from some fantastic Phil Lesh & The Terrapin Family Band shows at the Crystal Ballroom celebrating the 50th Anniversary shows.

Wow, we got some big news in the last week – the released of the Pacific Northwest shows from 1973-1974! Over the past year, Dave has been very busy releasing shows and watching birds down near the seaside.  When we last checked the numbers, he had just released Dave’s Picks 22.  They are now on Dave’s Picks 26. As of June 2018, the total number of released shows is 202. During this period, there were shows released from the following years: 1 from 1960s, 15 from 1970s and 2 from 1980s. Yes, we got shows from the 1980s! The RFK shows from 1989 were released last summer. They are fantastic late 80s shows from a stellar summer run. We highly suggest you check them out.

From the 18 shows released, there is not going to be a lot of changes in the numbers but let’s look at them. Looking at the aggregate data in the below table, 67% of the total releases were from 1970s, 8% 1960s, 11% 1980s and 14% 1990s but you will see that the 70s make up only 29% of all shows played over the band’s thirty-one year career. In other words, less than one third of the total shows still make up more than two thirds of the total releases. 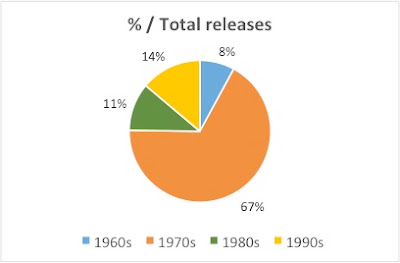 The below figure shows the distribution of the releases by year and by series type. The graph shows a significant deficit in shows from 1981 to 1987, which is only represented by a handful of releases from Dick’s Picks.

The following graph shows the distribution of releases by year compared to the total shows in a given year. The 1970s are shown to be still greatly over-represented in the releases. The graphs also plainly shows the lack of 80s and late 60s and early 90s era shows. 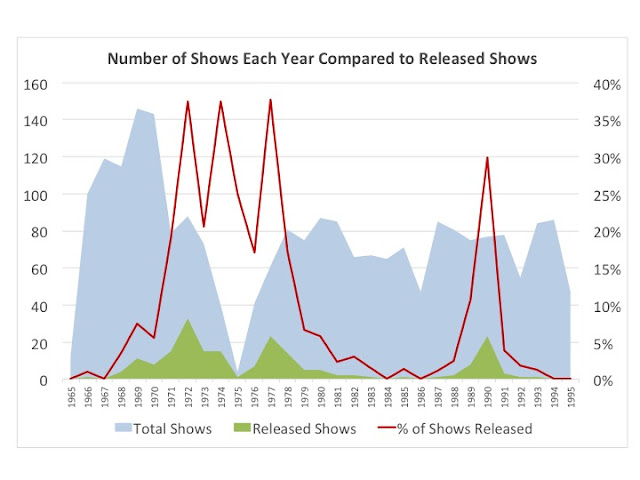 We are happy that we got a couple 80s shows but there are still severe inequities.  We know that the Betty Boards are finally back in the archives and we are really happy.  Dave’s Picks Vol 25 was awesome!  As we have stated before, we love 70s shows. Some of my favorite shows are from the 70s.  We really appreciate seeing the release of the Ann Arbor 12/14/71 show.

What we want is parity! Also, we feel the 80s are unnecessarily maligned and underappreciated. We will continue to bring attention to great 80s shows. We also feel that more Brent shows need to be released.  As you can see in the below, Brent played in 31% of all Dead shows but only 26% of his shows have been released.  On the other hand, Keith played in 16% of Dead shows but 55% of his shows have been released.  This is not even getting into Bruce Hornsby and Vince Welnick. 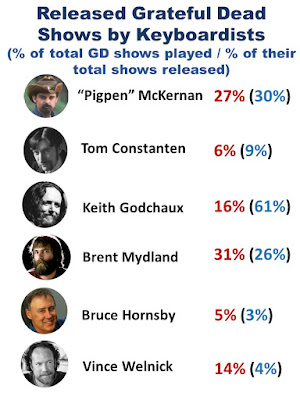 We will continue to celebrate the 80s Grateful Dead shows. If we can’t get official releases, we know there are a lot of tasty audience tapes out there.  Full of singin' and romancin'…But the music never stopped!