It has been a great year for Dead releases. Though the Dave's Picks series didn’t quit explore and honor the 80’s as we hoped, probably because all those Betty Boards, there were a couple of great releases. We particularly love the Giants Stadium boxset, which had the stellar 1987 and 1989 shows. Since the last blog post, Warfield October 1980 and Dave’s 27 (Boise) and Dave’s 31 (Chicago 1979 more in a bit on this in a moment) were also released. Open your minds, hearts and ears and check out those 80’s shows.

So is Dave’s 31 (Uptown Theater, Chicago) a 80’s show?  We say hell YES! and we give Dave a little credit for putting out this fantastic show. Like Dick’s 5, which was also a December 1979 show, this show signals a true rebirth of the Grateful Dead, totally reinvigorated (or cocaine fueled) and a foreshadowing of their 80s sound. [NOTE: We are loving @36ftv and they are about to discuss both Dick’s 5 & 6]. What makes Dick’s 5 and Dave’s 31 so new and special is in part due to the newly-ordained member Brent Mydland, who is bringing the organ back into the sound and giving Jerry a friendly smile and a new zest for exploration. It is like the Lakers picking up Pau Gasol in 2008 and giving Kobe a new teammate and a championship era.

From the first notes of Alabama Getaway you know there is a new person on the keys bringing his own magic to the group. Set 1 keeps rolling along with never-ending energy of one classic version after another of Ramble On Rose, Althea, and The Music Never Stopped. Set 2 is highlighted by an outstanding Scarlet>Fire and the new songs Lost Sailor>Saint of Circumstance. The show is capped off with a “Holy mackerel that was awesome! ” version of Truckin'. Throughout, Brent’s organ is driving the others to a peak that hadn't been felt for a couple years.

OK, back to the numbers. With the addition of the 22 released shows from February 2018 to February 2020, there won't be a great change in the stats but let’s look at them. Looking at the aggregate data in the below table, 66% of the total releases were from 1970s, 8% 1960s, 13% 1980s and 14% 1990s but you will see that the 70s make up only 29% of all shows played over the band’s thirty-one year career. In other words, less than one third of the total shows still make up more than two thirds of the total releases. 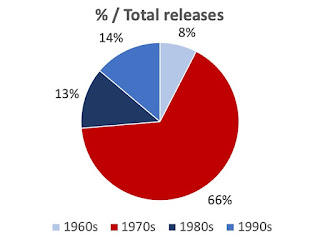 The below figure shows the distribution of the releases by year and by series type. The graph shows there is still significant deficit in shows from 1981 to 1988, which is only represented by a handful of releases from Dick’s Picks.  Sorry 1984, 1986, 1994 and 1995, you are still at zero. 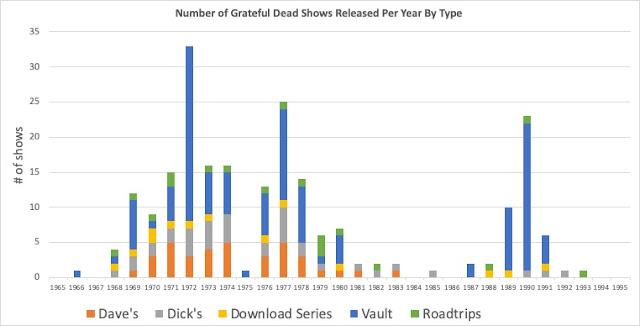 The following graph shows the distribution of releases by year compared to the total shows in a given year. The 1970s are shown to be still greatly over-represented in the releases. The graphs also shows the lack of 80s and late 60s and early 90s era shows. 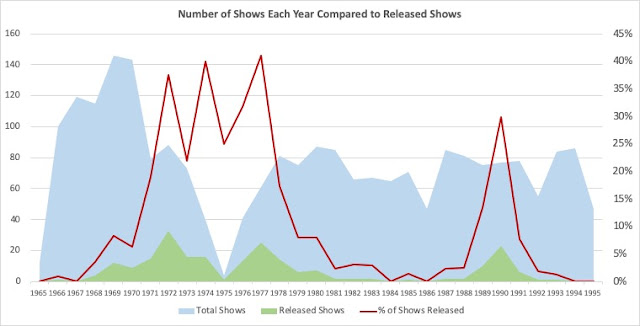 Because we love Brent, actually we love them all, we updated the shows by keyboard players.  As you can see in the below, Brent played in 31% of all Dead shows and is on 32% of their released shows.  On the other hand, Keith played in 16% of Dead shows but 64% of his shows have been released.  Tom C. gets more respect than Bruce and Vince put together. 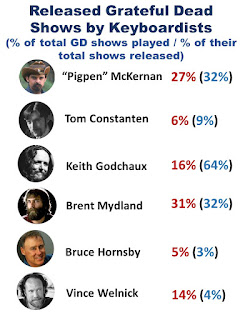 Thanks to Live Archive, we can celebrate the 80s Grateful Dead shows every day. Join us!