When we last checked the numbers in 2018, Dave had just released Dave’s Picks 34 and now we are at Dave’s Picks 42.  Time flies when you are listening to great Dead shows from the 80s!

Let’s dive into the numbers. We went back and cleaned the old data, fixed a couple issues and we now are at 276 officially released shows. Looking at the aggregate data in the below table, 63% of the total releases are from 1970s, 8% 1960s, 15% 1980s and 14% 1990s but you will see that the 70s make up only 29% of all shows played over the band’s thirty-one year career. In other words, less than one third of the total shows still make up more than two thirds of the total releases. 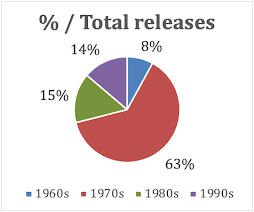 The below figure shows the distribution of the releases by year and by series type. The graph shows there is still significant deficit in shows from 1981 to 1988. 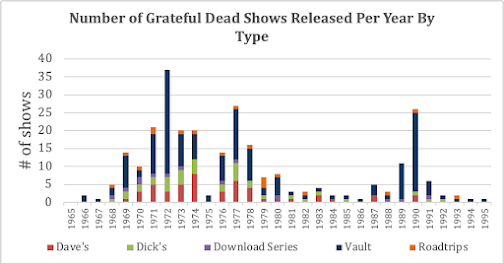 The following graph shows the distribution of releases by year compared to the total shows in a given year. The 1970s are shown to be greatly over-represented in the releases. The graphs also shows the lack of 80s, pre-69s years and mid-90s era shows. Vault shows make of the greatest number of releases, because these are the large releases such as Europe 72 or Spring 77 box sets. Dave’s Picks makes up around 17% of current releases. 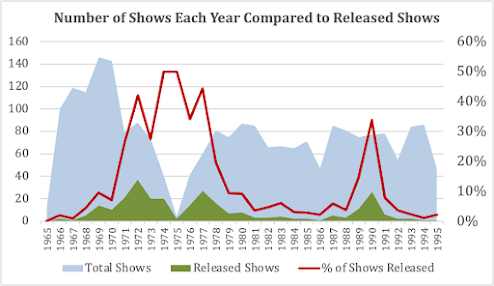 Because we love Brent, actually we love them all, we updated the shows by keyboard players.  As you can see in the below, Brent played in 31% of all Dead shows and only 27% of his shows are released.  On the other hand, Keith played in 16% of Dead shows but 52% of his shows have been released.  Tom C. gets more respect than Bruce and Vince? 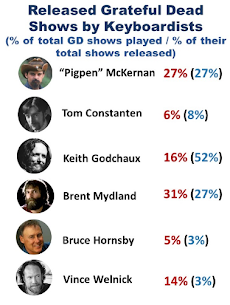 Thanks to Live Archive and to Charlie Miller, we can celebrate the 80s Grateful Dead shows every day. Join us!
Suggestion for listening: Check out the June 1987 shows! We are packing up the bus now and headed first to Ventura, CA before roadtripping to the East coast. 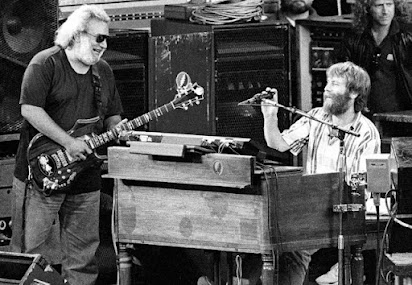